June is a great month for the environment at the UN! With new anti-waste campaigns kicking off, World Environment Day, and World Oceans Day, this June the UN has re-emphasized its commitment to the environment and the Sustainable Development Goals (SDGs).
This year, the United Nations headquarters decided to eliminate all single-use plastic from its premises as a part of an initiative to reduce plastic waste. The UN group Greening the Blue pushed for this initiative, which became effective June 1st. Greening the Blue aims to make the UN headquarters and all UN facilities more environmentally conscious and sustainable. Before the ban on all single-use plastics, Greening the Blue had already taken several steps to reduce plastic waste, including replacing plastic straws and coffee stirrers with paper and wooden alternatives. Greening the Blue is one of the many initiatives through which the UN seeks to lead its member states and its surrounding community by being an example of sustainable practices.
Another exciting environmental event was World Environment Day on June 5th. This year’s theme for World Environment Day was “Beating Air Pollution,” and it was sponsored by China. This theme is not only prescient but crucial, because over 7 million people die each year from complications relating to air pollution. One of the ways the UN honored World Environment Day was with a Green Fair at UNICEF headquarters, showcasing organizations from around the New York area and the world which were working to beat air pollution. Some highlights were the Billion Oyster Project, which wants to return the oysters to New York Harbor in order to clean up the water for everyone, and a booth promoting the SDGs.
World Environment Day and the ban on single-use plastics at the UN both remind us that there is no time like the present to take action for the environment. Working toward sustainability is a collective effort that must include everyone, and everyone can help work toward sustainability. 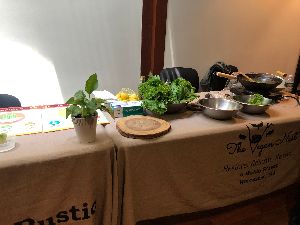 One of the tables at the UNICEF Green Fair!